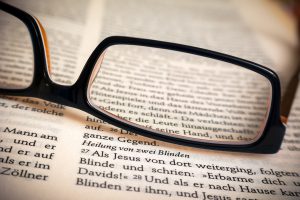 Things do not always go as we envision them.  We make plans that end up having to be altered.  We take wrong turns and get to hear those words, “Route recalculating.”  We think we have the solution to a problem, only to discover that someone else has a better solution.  In those cases we may argue passionately, but are brought to the abrupt realization that we were wrong.  And then comes the hard part, when we have to admit that we were wrong.

In Mark 10 we find a crowd following Jesus.  As a matter of fact, the Bible describes it as “a great multitude” (Mark 10:46).  And on that road from Jericho to Jerusalem, Jesus, His disciples, and the great multitude find a blind man named Bartimaeus.  Evidently, Bartimaeus started making a nuisance of himself.  He was yelling and carrying on, “Jesus, have mercy on me!”  Maybe the crowd was afraid he was going to annoy Jesus, maybe he was interrupting something Jesus was saying that they were trying to listen to, or maybe they simply didn’t like beggars.  Whatever the reason, as Bartimaeus was crying out, the crowd “charged him sharply” to keep quiet.  Bartimaeus wasn’t having it.  The Bible says that instead of being silenced that he cried out more and more.  Jesus evidently heard him—and may have been hearing him all along—but stopped and commanded that he be called.  First note, He did not call Bartimaeus Himself, but told the crowd to do it.  Note secondly that He commanded, not suggested, nor did He wait for the crowd to suggest it.  Whether Jesus had been waiting to see what Bartimaeus would do, or what the crowd would do, or for some other unknown reason, the time had come that decisive action was to take place.

So here the crowd has been, sharply telling this blind beggar to keep quiet, and now they have the responsibility to call him to the front.  How will they respond?  Will they do it?  Will they be resentful?  Will they drag their feet?  Will they throw obstacles in the path of the blind man?

Their response, of course, was this: “Be of good cheer.  Rise, He is calling you.”  Cheer up!  We were wrong!  You were right!  All is going to be well.  The Savior wants to see you.  Why did Bartimaeus need cheering?  Not only was his prayer going to be answered, but the discouragement brought about by the crowd had come to nothing.

This week, if things do not go as you had envisioned and you find yourself in the wrong (whether big or small), cease from discouragement and spread the cheer of being able to bring someone to the Son of God.