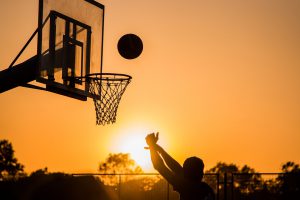 One of the things that you will hear every basketball coach preach is, consistency. Consistency is defined as, “the achievement of a level of performance that does not vary greatly in quality over time.” Consistency is a key athletic component for any athlete in any sport. As an athlete, you are nothing if you are not consistent. Sure, you can put up 30 points one night and push your team to a win. But, if you falter the next night, and your team loses, what have you accomplished? The answer: Nothing. Consistency is the unteachable component that every great athlete has or will possess.  Think about it. Michael Jordan, considered the greatest basketball player in history, averaged 30 points per game in eight of his fifteen seasons in the NBA. In the other six seasons, he averaged at least 20 points per game. If you don’t count the two years he spent with the Washington Wizards, after his second retirement, he averaged at least twenty-five points per game. That culminates to a 30.1 career points per game average. All while leading the Bulls to six NBA Championships, or two ‘three-peats’. That is consistency. Cal Ripken Jr., considered the “Iron-man” of all sports, played 2,362 games in a row. Wow. That streak only ended when he asked the manager to remove his name from the lineup in his final game in 1998. No matter what game or circumstance, you could guarantee that Cal Ripken would be in the lineup. That is consistency. Tom Brady is considered the greatest quarterback in the history of the NFL. His consistency is mind-boggling. Over the course of his 18-year career, in the seasons which he has started all sixteen games, Tom Brady has thrown for at least twenty touchdowns, for at least 3,000 passing yards, at, at least, a 60% completion rate. All while leading the Patriots to eight Super Bowls, winning five of those eight. That is consistency.

Let’s examine our Faith. Are you consistent in your Christianity? Consistency is the manageable and fixable component that every great Christian possesses.In 1 Corinthians 15:58, we read, “Therefore, my beloved brothers, be steadfast, immovable, always abounding in the work of the Lord, know that in the Lord your labor is not in vain.” All of the adjectives that Paul uses within this verse are synonyms for the word consistency. Steadfast means, “resolutely or dutifully firm and unwavering.” You cannot be consistent unless you are firm and unwavering. As Christians, we must withstand trials and tribulations all while being unwavering within our Faith. As Christians, we must be firm in our beliefs in order to remain faithful, all while bringing others to God. The word immovable means, “fixed or unchangeable.” In order to be consistently consistent as Christians, we must be fixed or unchangeable. We must be fixed our eternal goal, not letting the World of sin and temptation change our core goal, Heaven. It is not the past for which we live as Christians, but the greater goal that drives us towards eternity. While not a synonym for consistency, the word abounding is a vital component for a consistent Christian. To be abounding means, “To be plentiful.” As Christians, we must be plentiful in spirit and Christian characteristics. We must demonstrate qualities that make us stand out to the rest of the World, not fit in to the rest of the World. When others see our actions, our words, our ways, they should see a Christian. They should see an individual who is unmovable in the beliefs of his/her Faith, unwavering in the light of temptation, and steadfast in the completion of their ultimate goal, Heaven. If we can do these things, that is consistency. Now, after examining your Faith, are you a consistent Christian?